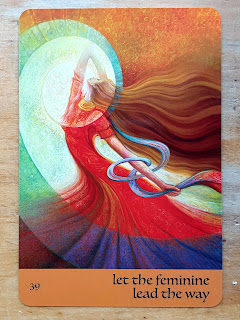 Deep inside my heart I have been aware for a long time that something has been missing from my life. Something lacking. Something stopping me from being whole.

I suspected what it might be when I started a certificate in counselling skills and was thrown into a close-knit group of women. Interaction was unavoidable and I felt out of my depth. I bonded with some beautiful women as we journeyed together, but in all honestly I knew I was still holding back.

Last year just before Samhain I randomly discovered Lisa Listers book 'Witch'. I had never considered Witchcraft as a path to follow, and had reservations about anything claiming the word Feminism. I realise now that I held fear over that word because it meant accepting the feminine in myself and admitting that I deserved to embrace the power I had inside as a woman. I consumed the book within a few days and it ignited something in me that was long forgotten; my feminine energy and power. I had neglected, and even been cruel to my feminine side for most of my life. I hadn't learned, or been comfortable with this aspect of myself and as a child I had revelled in being a tom-boy. As a teenager I had thought using my body to gain attention and 'love' was acceptable, and I had not really cared how I was treated. It felt like I deserved it; that was what I was there for.

The book encouraged me to question what I'd been feeding my inner Goddess over the years:
- that her body was useful to others, a bargaining chip
- periods were inconvenient
- women weren't really to be trusted
- feminists were trouble
- female power was dirty
- femininity was uncomfortable

I had questions:
- what did it mean to be a woman?
- what made me feminine?
- why had I been so cruel and neglectful?
- how could I embrace and love myself as woman, and learn to love and connect to other women?

I was lucky enough to grow up living with 2 generations of women: my mother and my grandmother. I have learned a lot from them and know that they love me unconditionally, but why hadn't that experience helped me to connect with my power as a woman myself? And why did I always keep other women at arms length?

My spiritual practise had been lacking direction, but after reading the book I felt like I heard Her calling. I had always felt connected and fascinated by the natural world and quite suddenly I connected the dots. Mother Earth was something I could worship and take notice of every single day, and that was the start of my relationship with the Goddess. I had been brought up a Christian, and still held great respect for those that chose to follow its teachings, but it had always felt drowned in patriarchy, and the feminine seemed nowhere to be seen. It felt powerful to explore the feminine aspects of the Divine, and the life that She gave me. I realise that at some point my practice will become more balanced, but for now the greatest healing for me can be found in the Goddess; Mother Earth. She gave me something to focus on, something to see myself reflected in. She helped me to begin to grow roots deep into the Earth to ground myself in a way that I'd never been able to before.

At the same time I learned the power of the word 'Witch', and how it fit snugly into the puzzle of my being. I began to embrace the feminine aspects of myself that made me unique, and began to trust the innate intuition I held that I had long neglected. I connected with the Moon and all that She could teach me. My questions remained, but I was beginning to see where I could find the answers. To be a Witch, for me, means using the skills that I have as a woman to weave magic into my life and the lives of those around me. I now do everything with intention, and my time and energy threads my work with something powerful. I like to make things: to create, and each time I do a spell of sorts is born. I have realised since I began to write again that this too is my spellwork. I have much more learning to do in relation to herbs, or oils, but writing is something that is innate in me. I am using the gift I was given. I'm finally embracing my calling and it's more wrapped up in my feminine energy than I ever could have imagined.

Lisa Lister talks a lot about wounds that we carry with us, both from our own experience and that of the generations of women before us that had been held back and persecuted. I have known for a while that I was holding onto a wound that felt as open as the day it was made. I did have a female friend growing up. We had been friends since we were about 3, and had been inseparable. She was as close to a sister as I've ever had and that felt wonderful. Together we were unstoppable, but then it all changed. We fell out over something silly and she stopped speaking to me. I didn't understand. I grieving as if she'd died. I was left with a hole in my heart where she had been. I felt isolated after mutual friends took her side, and I got through the rest of college and an abusive partner nearly all by myself. Ultimately the damage was far reaching and I carried it with me on my shoulders as I moved on with my life. I met other fabulous women, especially one during my time at University, but I know I held back from becoming too close because I was so afraid of being hurt again and getting my heart broken as it had been before. A few months ago, at the start of this journey I reached out to my old friend to ask what had happened and to share with her the pain and loss that I'd felt. She said she didn't know, but that she'd moved on and remembered the fun we'd had. My heart broke a little again to hear that she didn't remember what had been such a poignant moment in my life, but I was determined that it was time I began to heal properly. I was nearly 30 and I didn't want to carry the wound with me into the next chapter.

I realised I needed to take some time out alone, and do something I'd never done before. I came across the Wild Women Retreats page on Facebook and felt drawn to go to their retreat, but I was frightened too because I knew it would challenge me in ways I've never been challenged before.
I was terrified when I reached the retreat. I felt the warmth of the women who greeted me, but all I wanted to do was hide. Suddenly finding myself around 50 women was overwhelming, not just because I'm an introvert and large groups are draining, but because they were women and I couldn't ignore how the wound I carried ached and twinged. I could no longer turn away from my own womanhood when I was surrounded by those that radiated theirs like bright flames flickering in the night. I wanted to go home. I wanted to hide. Yet I didn't want to regret not making the most of the experience and so I opened up about my feelings just a bit, just enough for a few women to see what I held inside. That night I cried for all I felt and for the frustration at not being able to click my fingers and put it behind me. Something made me climb back out of bed to step outside, and I came across a woman who helped to ground me. Feelings weren't her forte, and yet she listened and empathised. She understood in her own way what I was going through, then she made me laugh and the load began to lighten. I woke up the next day with a brand new foundation, and a new found confidence to open my heart to the experience.  I don't really have the words to explain quite what happened, or how, but that day was a day for many firsts, including a deep soul-cleanse that I'd been yearning for unconsciously for years. I was finally able to connect to other women, to trust that the love and compassion they felt for me was true. I trusted that they held me so tightly that I would not fall. I finally had sisters again.

My journey still has far to go, and those wounds are still there, although they have begun to finally heal. I know I will need to challenge myself further in order to practise all that I've learned, and sometimes I may still feel that familiar mistrust and fear that has wrapped me in the past.

I move forward.
I take another step.
I keep my heart as open as I can, and reach out, hoping that someone out there will reach back and take my hand in theirs.

Popular posts from this blog

September 09, 2018
(* Spoiler Alert! * This will contain elements of the Introductory and First Gwers of the Bardic Grade.) I began the Bardic Grade with the Order of Bards, Ovates and Druids recently and the very first Gwers contains an Initiation ceremony to complete whenever you feel ready. I instantly decided that it wasn’t something I wanted to do until further on in the grade, so moved on and left it. I didn’t really think much about why I’d made this instant decision until I sat down to look at the second Gwers. I felt really frustrated that there seemed to be a block from stopping me from focusing properly to even read the first page. It suddenly dawned on me that there had been a lot of feelings surrounding my decision to leave the ceremony until later and I hadn’t given the proper time to exploring them. There was anxiety; fear in the pit of my stomach, ever-churning. Even as a Witch I’m not big on the full ceremonies and rituals and prefer to do things that are much simpler. It has
2 comments
Read more

June 13, 2018
Hi lovely ladies. In fact, hello everyone; including any marvellous men that this may reach too. I’m about to talk about something that is probably going to be a little uncomfortable for some of you to read, and some of you may think that this is far too much information to be sharing. Honestly, I’ve questioned whether this is the right thing for me to do A LOT, because it’s putting myself out there and being totally vulnerable about something private and personal that I’ve had to cope with. My decision to share has been fuelled by the powerful desire that, as women, information and understanding about our own bodies should be made more readily available to us, so that when things go wrong we feel we have the tools necessary to understand what’s happening in some small way and can therefore cope and overcome things more easily. So, here are some questions before I begin: Have you ever heard of Bartholin Glands? Did you realise that every woman has two of these? As women, do
2 comments
Read more